We knew things would feel a little chaotic in the beginning and we are confident that activity will settle and players will find it a lot more pleasant.

I highly doubt that.

It will happen. I’m sure atleast 70% of the players in there now are people who rarely go to the castle anyways and are just there because it’s brand new
Zkills, Proud general of the beloved KodiakReavers of Belenus, the G.O.A.T clan

#32 by Xslavers
The game will for sure die out now. I was online for 10 minutes and already lost the motivation to play on. The lag is unreal in the castle.. yeah all other areas works just fine, but looking more at loading screens than getting bounties done will kill bounty board. Stupid idea to re arrange the sacred castle into a global area.. I highly support the Tavern idea. It’ll be social more than enough for everyone that seeks a nice chat with players from different servers. The fact that you cannot trade them in castle also ruins it for me, it’s fine that you cannot trade in the Arena or probably won’t be able to in Tavern either, but Castle should stay the same way as it has always been like.
Xslavers
Lvl 219 Rogue
Mabon
YouTube channel: https://m.youtube.com/channel/UC4tWKrjj3ievoBDG8gNt74w

#33 by Tsunami
Can we get an option to filter castle to be only players from your own server ? It’s very confusing reading all the buying and selling

#34 by Rikitt
I would like to disagree (-1) to a global tavern idea. It would only be slightly better than the castle. I say this because many are in the tavern cooking. A lot of chefs in one spot will massively lag those doing their best for their clans or just to help themselves. And spam in the chat won't help them either. I'd recommend a simple blank design area, just an open room somewhere accessible in the castle that players can enter and it be a casual meet-&-greet server-wide area.

#35 by Doc Holiday
Aww ya the auction house is unusable, if we could move the essential stuff elsewhere that'd be great.
Like move bounty board, gladiator, bank and ah to new location. Then players don't need to access the castle unless they want too. 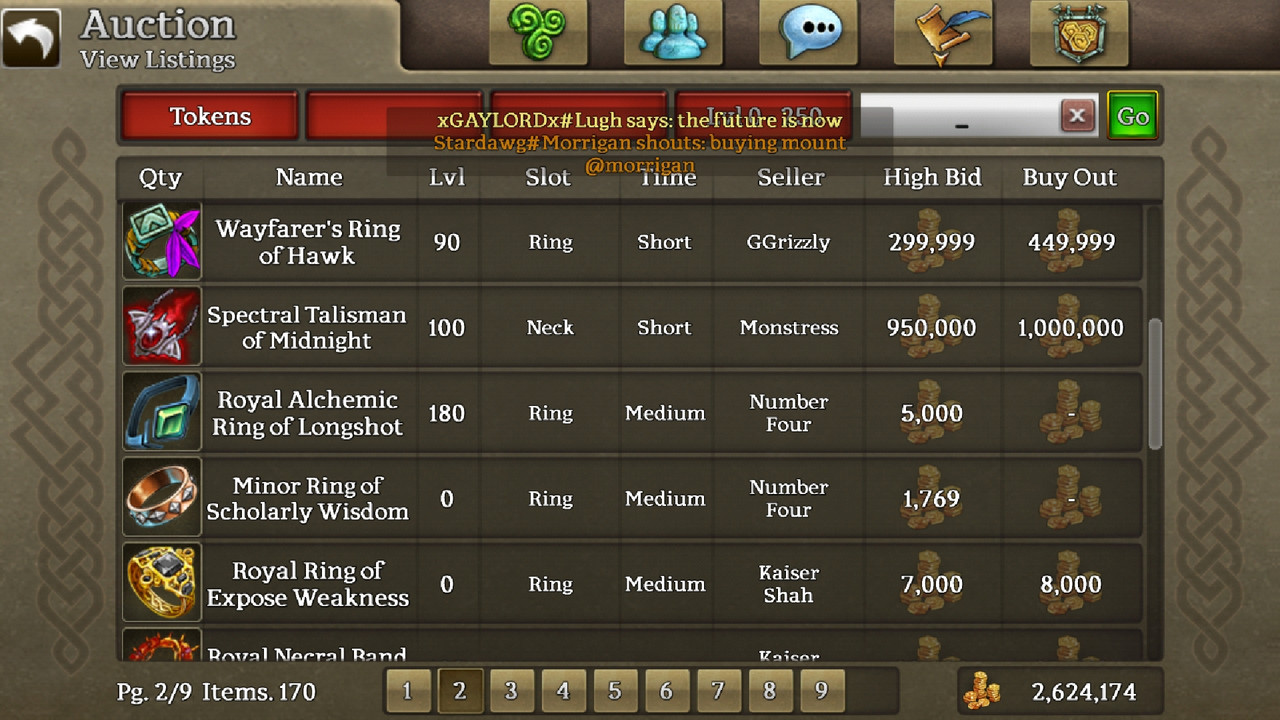 #36 by Zkills
The tavern idea was discussed in Beta and it was concluded (mostly) that the castle was a more suitable option. The problem with the tavern is that it’s out of the way and nobody goes there to begin with but cookers. It would for sure die off within a months time. And yes, a global tavern would be annoying for those trying to cook and spending actual recourses.

The castle is better because it’s much larger than the tavern and it already servers as the social hub of the game. On a lot of the servers the castle has little to no social activity which is a negative, and a global castle helps combat that. Said it many times, just give it a few weeks and the numbers will drop. Guarantee it.

As for the lag, anything before the IPhone 8 is already outdated. I’m personally using an iPhone 8 and have had no problems but a little stutter here and there because of the large amounts of players, which will be resolved as time goes on. I did notice longer loading times when trying to enter/log into the castle but I’m sure that can be fixed.

Move glads out of the castle. Should have been done by now. That’s my only real criticism

Last edited by Zkills on Wed May 08, 2019 8:25 am, edited 1 time in total.
Zkills, Proud general of the beloved KodiakReavers of Belenus, the G.O.A.T clan

#37 by Miakoda
Maybe we would be less frustrated by all the annoyances of the global castle if we understood why you guys decided to do it? Does it serve some future purpose? Is there some benefit we just haven't found yet?

#38 by Kel
I use a somewhat older device to play celtic heroes. I went to the castle today and crashed. Couldnt log back in till I turned off all pets made all characters default and lowers my renders and graphics to the lowest quality even with that I crashed 4 times trying to load the map and leave farcrag. I cant get my bounties, cant use my bank and cant see the auction house. Please if anything add a toggle that removes all players and messages from worlds that aren't your own. Its all just one big mess that doesn't serve much purpose.

#39 by Dynamit3
Is there literally anything that can be done to reduce the amount of lag this causes, I also can’t even log into the game because my toons in castle, it could stay loaded for 2-3 minutes and nothing, it’s a bit ridiculous for one of the more popular areas in each server
#EponaDom2020

#40 by MSC
Currently unable to log into the game as I logged off in castle, please fix this asap.
~MSC Fire mage 215
~Proud Clansman Of Resurgence
Page 4 of 16
153 posts
Post Reply

Users browsing this forum: No registered users and 23 guests