paggasquid wrote:I am not saying Alliance was perfect. It had so many flaws and most criticsm was justified. What I am saying is that pegasus is simply Alliance with a different name tag. Frankly a big part of the same playerbase, the same arrogant mindset and the same flaws. I guess in time you will understand what I mean.

Piggies, pigs, pegs was a simple funny abbreviation, an occasional switch up from ooc

It’s laughable you would say we griefed anything

I don't find it laughable and it did happen. I won't deny that more incidents happened after this, or that both sides have been in the wrong. However, I was simply stating the reason why Alliance as a clan backed out and that it was not so sudden and ungrounded as described.

I’m tremendously sorry that what we are doing doesn’t fit the new reformed Mizza’s idea of a good server or a good clan. I’m sorry we are having fun in a way that doesn’t suit you or your new Communist ideals.

And I take it that you're american and that you somehow tried to belittle my ideals by putting 'communist' in front of it. My ideals, an open server with an open free market , does actually not ressemble communism. If anything it ressembles capitalism, since property is owned by an individual and resources are not controlled by a public entity like a government... or a clan in this case. So frankly a dom-clan set-up uses more of a communistic approach. For a refresher course check this link: https://www.thebalance.com/communism-ch ... es-3305589

It's a pity that this ended in personal attacks involving tiny violins and tissue boxes. Could have used that time instead to make your posts slightly more accurate.


1-Js we never griefed on any bosses its one major clan rule; that one prot where we pulled prot on rangers as u say, no they werent pulled to ur rangers, there was no one tanking prot so prot ran to ur rangers after they aggroed, then we logged a tank to pull ..... lol..... as for gele it wasnt griefing it was a lock battle... lock battles are not griefing. And we killed.
How many times u guys were “afk” at necro? Or how many times cosmoz pulled 210 adds on 5 stars and 4 stars just so we wipe, and if u ask him he will openly admit it, as well as xillsare and many more


2- what are you doing here still lol just leave our post.... u dont like our system? Cool, our clannies do if u want to show up try to outlock and do ur thing lol, now please stop posting on this post

asking u nicely haha u dont like us?cool, we dont care

#32 by Armo
I understand things can get heated between opposing clans (I’ve been part of a few similar arguments back in the day).

Just do remember all it generally does is give the server itself a bad rep.

rob155 wrote:Lol, this is too funny. If you don't like Lugh go to Epona. Stop mentioning Pegasus & focus on your own clan. Thanks.

#35 by Enceladus
Hello all,
My name is David, i started this game in September 2012 as warroir. But had to leave it there at Christmas 2012. I cant remember which server i played. Neither i remember the username nor its password. And never registered it to my mail. I had to leave due to my carrier opportunity i was achieving that time. I found a colleague in my word area who play this game. And he invited me to join Lugh. Cant remember his in-game name.
So i was here just to ask is it a good server to start from nil.

#36 by MrsDredd
You took it out of context to make it look like we want you. Conveniently didn’t post the part where it was said

Would you like us to start a GoFundMe to get your some therapy to help you get over your weird obsession with Pegasus? Or did you make enough from selling your toons to a scammer to fund it yourself?
MrsDredd - 223 Rogue
Penny Dreadful - 220 Tank Warrior
NurseDredd - 220 Druid
DreadOnFire - 220 Fire Mage
Dreadshot - 203 Ranger

#37 by paggasquid
I have the obsession? A friend of me send this to me, saying you guys are at it again talking smack about me. Seems the obsessions is the other way around

#38 by MrsDredd
Well you do kind of make yourself a target of mockery when you go into Pegasus-free chats to boast about Nuada killing Dino and saying RIP Pegasus when it literally has no effect on us or any meaning to us whatsoever...

But whatever you jack off to at night dude...

#39 by paggasquid
It has no effect, yet so triggered 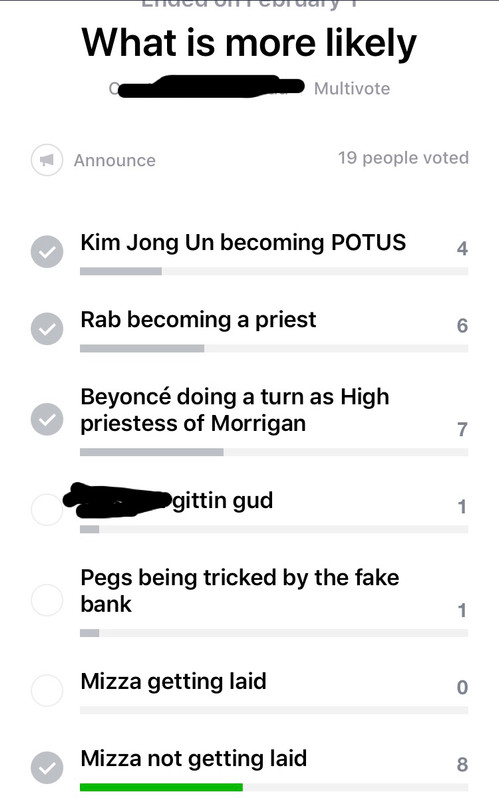